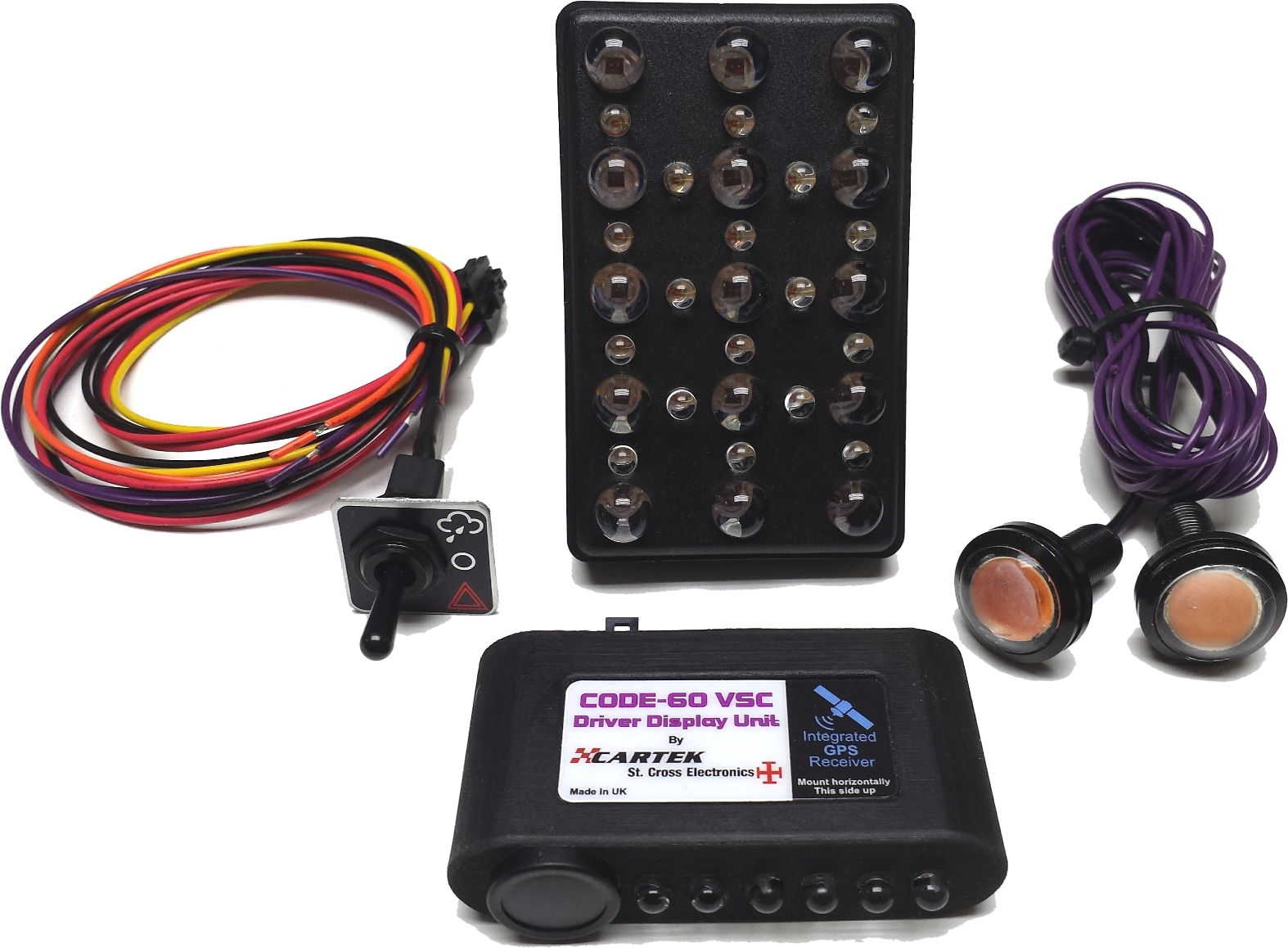 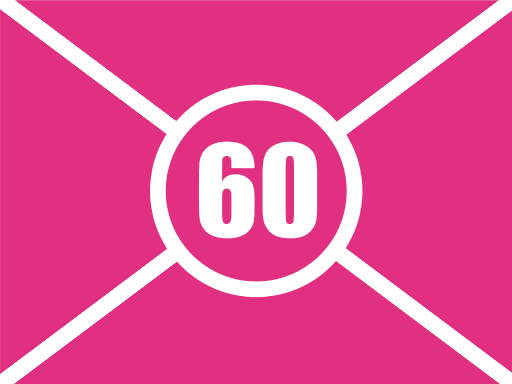 We have developed this unique product throughout the 2017 racing season together with our technical partners, Cartek Motorsport Electronics.  The Code 60 Virtual Safety Car, C60VSC, is a simple way of making car racing safer when Code 60 flag conditions are brought about.  Our system also makes it very easy for circuits, clubs, and racing bodies to implement and police the Code 60 situations.

Code-60 is a flag system used to a race allowing marshals to safely attend to on-track incidents. Code-60 operates in a similar manner to deploying a Safety Car but with the following advantages:

1.  A race can be immediately a Code-60 command is issued by the Clerk of the Course whereas there can be a noticeable delay in deploying a Safety Car while it starts up, joins the track and waits to pick up the race leader.

2.  Once the on-track situation has been removed then racing can resume immediately the command to withdraw Code-60 is issued whereas there can be another delay while a Safety Car circulates back to pitlane before racing can continue.

3.  Race positions and gaps between cars are maintained throughout the Code-60 period meaning no driver is disadvantaged or gains an advantage while marshals are attending to an on-track incident.

What are the problems with Code-60?

Code-60 has been used successfully in Europe for several years but mainly in endurance racing where drivers have communication systems such as pit-to-car radio or cockpit lights. When it was introduced in the UK at the start of the 2017 season for club level sprint racing several problems were encountered:

1.  Many club level race cars are not equipped with accurate speedometers, many not having a speedometer at all. As such, it was not possible for these drivers to maintain a steady 60Km/ required by the Code-60 flag.

2.  Marshals and officials had no way of determining which drivers were adhering to the Code-60 speed and which were not. If a gap between two cars closed during Code-60 then it could not be determined if one car was exceeding 60Km/h or if it was another that was driving below the required 60Km/h.

The Code-60 Indicator System (C60DIS) has been created to allow Code-60 to be used safely, reliably and accurately in all categories of circuit racing allowing marshals and drivers at all levels to benefit from all of the safety advantages that the Code-60 flag offers. The C60IS consists of 3 elements:

Central to the C60VSC is the Driver Display which incorporates a GPS receiver and 6 LEDs. The C60VSC is enabled by the driver pressing the pushbutton on the front of the unit whereupon the LEDs will begin to indicate to if they are driving above, below or at 60Km/h.

The C60VSC Driver Display is capable of controlling two mounted, purple lights which can indicate to marshals and officials that the driver has responded to Code-60 flags. The purple light will operate as follows:

The C60VSC also includes a dual, rear mounted Rain Light. This Rain Light uses a high intensity, red light which complies with FIA Technical List 19, but also an Amber LED for the warning function of the device.

How it works (We have since swapped flashing and static functions, see above)

The Code-60 Driver Display incorporates a satellite GPS receiver, which it uses to accurately determine speed, and 6 high brightness, LEDs. The device is simply activated by pressing the button when Code-60 flags are spotted, whereupon the unit will immediately indicate to the driver their speed relative to the required 60Km/ shown below. The target for the driver is then to drive at a speed where the two Green LEDs are lit indicating they are driving between 58Km/h and 62Km/h.

The driver can activate and deactivate the Code-60 display at any time by pressing the button. However, once activated, and the car is driven at 60Km/h, then the system will automatically deactivate when the driver accelerates past 80Km/h on noticing Code-60 flags being withdrawn. This prevents the driver accidentally leaving it activated when the Code-60 period had ended.

Once the C60VSC is activated the side mounted, purple LED lights will provide an external indication of the speed of the car relative to the required 60Km/h. These lights will stay on if the speed is at, or below, 60Km/h and flash slowly if the car is above 60Km/h. There will be a tolerance ± 4Km/h. This will enable marshals and officials to spot any car, at any position around the circuit, that is exceeding 60Km/h during a Code-60 period. It can also be used to police 60Km/h pit lane speed limits. As these lights will not be illuminated when the C60VSC is not activated then this also alerts marshals and officials to drivers that have failed to acknowledge the Code-60 flags.

The rear mounted, Rain Light will also provide an external indication of the speed of the car relative to the required 60Km/h to any cars driving behind. In a wet race the Rain Light will flash Red slowly if the speed is at, or below, 60Km/h and display static Red if the car is above 60Km/h. By indicating to cars behind that a driver has activated Code-60 it can help prevent shunts when other drivers have not noticed Code-60 flags being waved and will also notify other drivers when Code-60 has ended if they are not in sight of a marshal post at that time.

The Code-60 Driver Display also has a 3 position Rain Light Switch connected to it which allows the driver to operate the rear Rain Light in 3 modes when Code-60 is not in use:

The Hazard Warning feature allows the driver to manually override it if they encounter a problem with their car. e.g. if the driver finds they have stalled on the grid, suffered an engine failure or has a puncture, then by flicking the switch to Hazard Warning mode so the rear light will display a highly visible, red flashing sequence to indicate to all other drivers that their car is stationary or moving slowly. This helps reduce the risk of crashes.

The Code60 VSC monitors the speed of the car at all times, not just when Code-60 is activated. As such it can determine if the car is at racing speed, below normal race speed or is stationary. The  has the capability to automatically indicate to other drivers if the car is stationary or moving slowly via the rear mounted Rain Light. 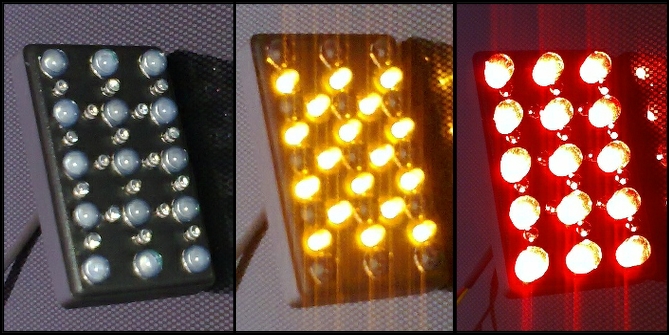 Produced in technical partnership with